Richard Stravitz graduated Adelphi University in 1958. A native of Manhasset, Long Island, this former Marine and retired Chairman of Boars Head Provisions in Brooklyn, New York, pursued his growing interest in art, painting with oils and sculpting wood in his spare time. In 1983, Richard Stravitz moved to Richmond, Virginia and took early retirement in 1990 to pursue his lifelong love of art and sculpting. These days, he has the joy of devoting himself to creating marvelous bronze pieces with the technique used by the sculptors of ancient Rome.

Employing the “lost wax” technique, Stravitz begins each of his works with wire and clay. After undergoing a few subsequent steps, part alchemy and part foundry, wax takes the place of the clay and then is melted away (hence, the “lost wax”) inside a ceramic form, into which the molten bronze is finally poured, allowed to harden and then released into its final state.

Each of his pieces remain true to their subject, with muscle and sinew realistically wrought, magically revealed; the soul of the subject emerges as well. A compliment to his ability to capture motion and detail, Richard Stravitz is widely-recognized for his distinctive ability to sculpt emotion.

Richard Stravitz sculptures are displayed throughout the country in prestigious settings including the Supreme Court Building of Virginia, the John Marshall Law School in Chicago, the Virginia Historical Society in Richmond, the John Marshall House in Richmond, the College of William and Mary in Williamsburg, Virginia, Mary Washington University, Fredericksburg, Virginia, Old Dominion University in Norfolk, the United States Naval Academy in Annapolis, Maryland and many more.  Commissioned in 2010 to create a life-size bronze sculpture on the boardwalk in Virginia Beach, Virginia in honor of Josh Thompson and the battle to defeat Amyotrophic Lateral Sclerosis (ALS), Richard has been dedicated to working towards a cure.  A smaller maquette of that statue (Anticipation) is sold at the Richard Stravitz Sculpture and Fine Art Gallery with a portion of the proceeds donated to ALS research. 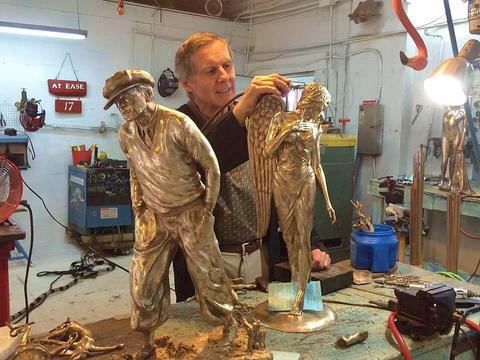 Richard Stravitz working in his studio

Richard Stravitz with his sculpture. 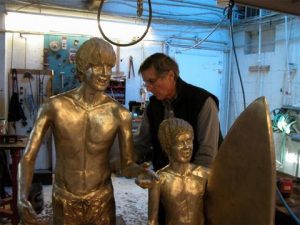 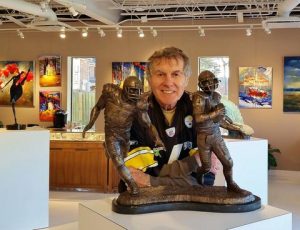 Recognition and Awards include:

Working primarily in bronze, Richard has studied at the following schools/studios: