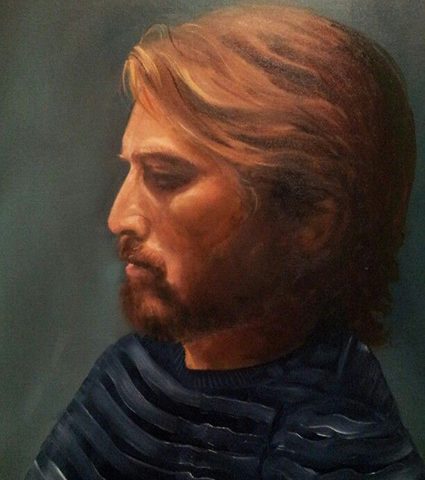 Victor Nizovtsev is a masterful oil painter of theatrical figurative composition, fantasy, landscapes and still life. While his professional art training occurred in Russia, as an artist, Victor is a student of rich and diverse experiences. The inspiration for Victor’s art comes from all he sees and touches. It can be Greek mythology, Russian folklore, childhood memories, great masters of the past, or routine daily life.

Victor’s art can be highly symbolic with hidden clues to help decipher the images. His work can also be humbly simple with images and subjects of universal appeal. They can be equally viewed for their vibrant textured colors that fill the canvas and contrast with the translucent glazes that make the paintings dance with light and pull in those who view it. Victor breathes life into each work inviting the viewer into the painting as a separate universe, one filled with boldness, energy and rich hues.
Victor Nizovtsev was born in 1965 in Central Siberia, in the city of Ulan-Ude near Lake Baikal. When Victor was a little boy his family moved from the Russian Federation to the Republic of Moldova. Victor grew up in Kotovsk, a town located in the heart of the region’s wine country and 30 miles southeast of the capital of Moldova, Chisinau.
At age nine he entered Kotovsk’s Art School for Children where he studied for four years. In the 9th grade, he left home to study at Ilia Repin College for Art in Chisinau. He then studied at the prestigious Vera Muhina University for Industrial Arts in St. Petersburg, Russia. Upon graduation in 1993 Victor returned to Kotovsk where he began painting professionally. In 1997 Victor moved to the United States where he successfully continued pursuing his art career. In 2004 Victor moved from Washington, D.C. to Maryland where he resides with his wife and young daughter.
In his short time in the United States Victor has enjoyed a high degree of success, exhibiting in numerous solo and group shows with collectors excited to find and acquire his unique and imaginative paintings.