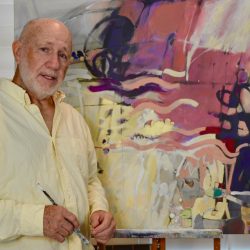 John Alan Stock is an American Artist, currently residing in Virginia. He graduated with a Bachelor of Architecture from Ohio State University with minor study in Fine Arts.

Exhibitions. He has been included in a broad spectrum of major juried exhibitions, twenty-one (21) Solo Exhibitions, nine (9) Two-Person Shows and over one-hundred group shows from 1968 through 2008. He took a hiatus from exhibiting art between 2007 and 2016 due to health issues, but he has returned to a full-time focus on art.

Series. His contemporary art is organized in Series that stretch across a broad spectrum of subject matter in a variety of mediums; painting; mixed media, drawing, monoprints and to a far lesser extent, mobiles and sculpture. “I have always been intellectually engaged in a variety of interests, have had a lifetime of travel abroad, and I remain interested in many subjects. This has led me, as an artist, into many directions (Series). I’ve been  creating art over five decades, so time is always a factor. These considerations drive diversity in subject matter, approach and execution.”

Stock has twenty-six different Series that started in 1968; they range from such diverse titles as: “Myth or Legend” and “Architectonics,” to the more cerebral content of “Innervisions” and “In Search of”. Some Series have been completed, where the subject has been fully exhausted and thus retired. At the same time, others have been left open, as the artist senses he has more to explore, and that has come to pass. The artist has created new work in several Series which are beginning to appear on his website: johnalanstock.com and his feed to Instagram: @johnalanstock.

History. Given his career in urban planning and architecture, he has tended to engage primarily with galleries in, or close to Virginia, Washington DC and North Carolina. He considers a family cottage, located upstate in Michigan, to be his “studio north” and he has some history in exhibiting in that region as well. He has selectively shown in galleries in Connecticut (Greenwich), California (San Francisco) and New York (NYC) as opportunities evolved. His art has traveled in U.S. cultural exchange programs across multiple continents, and he increasingly found success competing in juried exhibitions.

His drawings have been selected for multiple international drawing competitions (such as, Cleveland, England juried exhibitions and four American Drawing competitions to include three biennials sponsored by the Smithsonian Institute; and he has participated in those U.S. extended tours of over forty (40) museums and major art centers across the U.S. and extensions to international locals. He has also produced extensive graphic designs for public and private entities, winning national recognition in graphic design from print and publication media.

From the broadest perspective, Stephen Covey may have said it best, “We see the world, not as it is, but as we are!” We process everything through our own lens; our set of norms, values, beliefs, preferences and prejudices; all cast in stone. For most, the ability to think creatively outside this “mindset” is challenging; the brain has it’s mind-set, shall we say. One is fighting the evolution of the brain and the mind that operates within it. As an artist, I don’t try to create “outside the box”, I respond, “There is no box, it is just a mirage.”

Most artists at some point in time, define their turf and drive a stake in the ground. Then they proceed to create a lifetime body of work staying inside the fences. I admire the dedication to stay within the boundaries, but I have found it self-limiting. From time to time, I have had to move the fences.

I have created a significant number of paintings in four Series, but once I felt I had exhausted the intent, I knew I needed to plow new ground. The speed and scope of new information coming from every direction through expanding multimedia can be overwhelming at times. As an avid reader on a wide-variety of subjects, I am into everything from neuro-science and evolution of the planet to sustainable design and Calder mobiles. Twenty-six separate Series over 50+ years has been a long ride. But I continue to move forward, excited about hat I will create in the next decade.